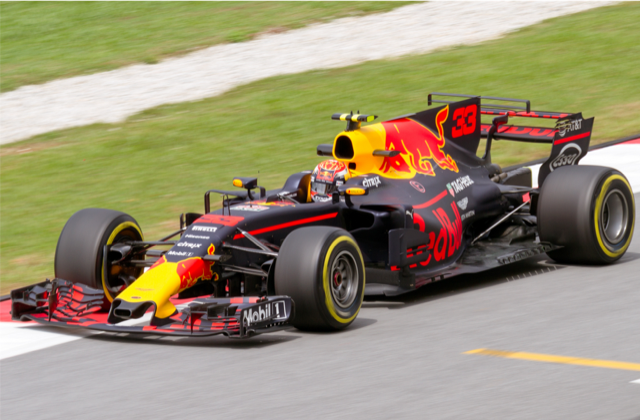 A guy named Roy would like to see the Ya in Portimao. Sunday afternoon was our only option. He said: “Sorry, I have got a ticket for the Formula 1 races here. Yes, I know, it is a combustion spectacle of fossil fuels, but I love it.” We think Formula 1 racing can actually fuel fossil freedom and we will show you why in examples from sailing formulas.

Formula 1 racing has always been good for the reduction of fossil fuels. The competition must be fair, so there are strict regulations for the cars. For example, the cylinder volume is limited to 2,5 litres. And it is anyway better to use less petrol, because that saves you pits stops.

Where it all started

We see the first development in the history in sail races. It was in 1660 that the Dutchmen gave the young prince Charles II of England a ‘jaght’, which he called ‘yacht’. It was a rather wide, flat bottom boat with lee boards, ideal for the shallow Dutch waters. The Dutchmen organized regattas with these oversized dinghies.

When king, Charles started experimenting and built several yachts. During the following centuries, the kings and noble men started racing against each other, mostly near the Isle of Wight. The waters are deep there, and you could see the shape of the yacht change. The ships became slimmer and the length extreme, because they experienced that with more length you could sail faster. It would not capsize, on the contrary, because they let the hull flow with smooth lines into a long keel, with lead or cast iron under it.

Where it got shape

All yachts were unique. So, they started making formulas containing all pros and cons, expressed in handicaps. For example, the longer the length, the bigger the handicap. The Formula of the famous America’s Cup is perhaps the most famous, and for sure the most discussed example.

The handicaps used in the sailing Formulas lead designers to make specific choices. For example: with more length, or more sail, you can sail faster, but in the formula, it leads to a higher handicap. So, these are the variables a designer can play with. Which they did. And therefore, from the time these formulas became popular, all designers and wharfs started designing yachts that could get the most speed with the least energy. This is where the path to fossil freedom starts.

Until the 20th century the design of a yacht was based on feeling and experience. But then rationality came in. Naval architects started gathering data. They learned from science in aerodynamics and hydrodynamics. They used the data for modelling, etcetera.

For over a century, everybody believed in the smoothly shaped longkeeler. And suddenly there was the finkeel of Sparkman and Stevens. Instead of a long, full hull keel, they designed a deep, short keel, a so called fin keel. With this keel, the yacht had less drag, less resistance, and it could sail faster and higher to the wind. Nowadays, most boats are built with fin keels. Likewise, the centreboard of the Ya has a short and deep fin. Completely down, it draws 2.7 meter.

The Formula of the America’s cup leads to extreme ships. They manage to get an enormous efficiency. With only foils through the water and the hull ‘flying’ over the water, they make 5 times bigger speeds than the old fashioned longkeelers. And like the fin keel of Sparkman and Stevens, the foil is now finding its way into the yacht design.

We see the same with the Formula 1, 2, 3 and other racing sports. The tires for example, made great improvements and that is what we now have under our cars. They save fuel. The shapes of our cars are aerodynamic now and save fuel. Many small and big improvements under the hood find their origin in the races under these formulas.

So, Roy: enjoy your Grand Prix in Portimao: Formulas like these fuel the development to fossil-freedom.