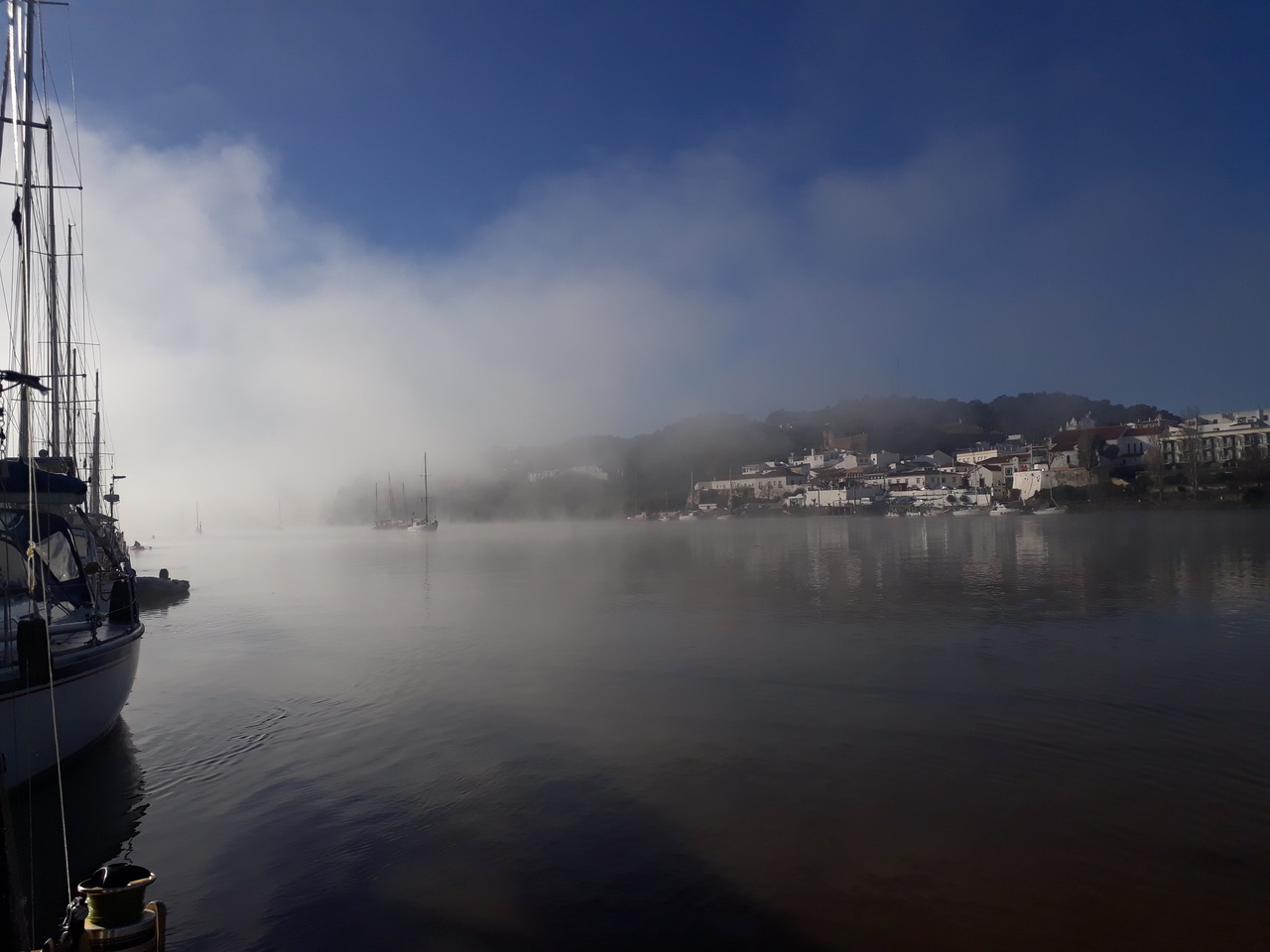 There is a plan to build a bridge over the river Guadiana, to connect Alcoutim, on the Portuguese side, and Sanlucar de Guadiana on the Spanish side. We wonder if the bridge is a good idea. Because we adore the undisturbed beauty and silence of this place. Will it help these little towns? We are concerned that this bridge will not bring them the desired economic development. Then it would just be a waste of money, spoiling all that makes this place special.

The silent call of the Guadiana

A strong flood takes the sailing ship from the mouth of the river Guadiana, under the bridge near the cities Vila Real and Ayamonte, about 15 miles all the way up to Alcoutim and Sanlucar.

A sailor arrives here when the flood stream starts slowing down to a nice flow. You feel the calm, the peace here. Time to anchor. Easy, because the Guadiana has plenty good anchor grounds.

The village of Alcoutim has about 1000 inhabitants, Sanlucar about 400. Both places are located ‘at the end of the country’. Or even at the end of Europe. Well, at least it feels that way. Our Portuguese friends all see Alcoutim as the ultimate place of peace and silence in Portugal. They come here, over the little roads, and for them this area is the place to be. The Portuguese and Spanish tourists come to these far ends to enjoy the silence, the handful of friendly restaurants and bars and the idea to retreat in case you need a real still, buzz free holiday at end of the world.

You can kayak, swim, make a small river cruise. If you want to go to the town on other side of the river, you ask the man of the ferry boat to take you there.

There is also a cable from the one to the other side. Great for hikers. The Portuguese and Spanish walks are fabulous all year round, not in the least because of the undisturbed landscape and silence.

Our “Ya” is staying here in winter. For decades, there has been a small sailors population of some 50 sailing boats depending on these villages for their services. Each village has a small dockside, which guarantees an international ambience.

We like our walks here. The area around Alcoutim and Sanlucar is quiet. As long as we’ve been here, the silence is broken only by the occasional motorboat, a single car passing by, roosters crowing, birds singing, a barking dog and people talking. When the sun shines sometimes there’s music from people playing instruments, alone or together.

Once every three year there is a bridge during the Festival do Contrabando  (Smuggler’s Festival). Small scale theatres, arts and artisans on both sides and a temporary bridge connecting the villages. This attracts lots of tourists.

Now, the Portuguese and Spanish local administration have made plans to build a bridge between the villages. This could help connect both sides. With a car it would take 10 minutes from village to village, instead of an hour. But which local would want that? If you would want to just cross the river, you can also go by ferry. This takes 10 minutes if you include the waiting. In general, there seems to be little exchange between the people of the two villages. The only ones crossing the border seem to be the sailors. There is one Spanish commuter regularly going up and down, and there are tourists, mostly hikers, crossing over by the ferry boat.

The sparsely populated rural areas on both sides would not generate a lot of traffic. There is already a bridge over the Guadiana in the north (near Mertola), and one in the south (near Castro Marim), both about 30 km away. Sanlucar could benefit from the fire brigade and the health services in Alcoutim, if there wouldn’t be institutional and language barriers to be bridged first.

We are asking ourselves: who is really going to benefit from this bridge. Will there be economic development because of the bridge? From what sectors? There’s hiker’s tourism, some small scale agriculture, no mining or other industry. So, tourism might be one of the viable sectors. But then the question is: what do tourists want? We think the tourist who come to this kind of remote area wants good food, nice walks and a pleasant environment.

The sound of a pleasant environment

A pleasant environment. Now we sailors and hikers get interested. Especially Peter, as an environmental scientist. He did a small ‘sound check on the spot’, as follows. He made a 10 seconds movie on a popular hiking trail. Just a random movie, so under the film you here the silence, with a footstep, some buzzing flies and a bird. This film-and-sound is recorded some 800 meters from where the bridge might be projected. We expect it will be a bridge with two lanes, with cars passing at 80 to 100 km per hour. So, then Peter put the noise of this kind of road under the same film-and-sound. Here under you see and hear the result.

This traffic noise is not loud. It would comply with the regulations about noise pollution, so don’t worry. But you would hear it. And it completely overwhelms the tiny sounds that a hiker, a sailor comes for, what many tourists enjoy. This region is one of the few where silence is not yet broken. Lucebert, a Dutch poet once wrote: Everything of real value is defenceless.  We would say: the sound of nature is at least vulnerable. Maybe we appreciate silence more because we have lived in big cities and we know what it’s like when you’ve lost it.

So, let us reweigh the plan of this bridge against the loss of silence in this environment.

In the past decades, the roads to Alcoutim and Sanlucar have greatly been improved; they are small but good. You can easily travel to and from the tourist hotspots of Vila Real de Santo Antonio and Ayamonte on the coast. For tourists, there seems to be no particular added value that a bridge for cars might have. Also, the local inhabitants don’t seem to particularly need this infrastructure.

Perhaps an elegantly shaped bridge for pedestrians and bikes might be of true added value. Especially if the bridge itself would be worth visiting, like the hanging Geierlay bridge or the Pedro e Inez bridge in Coimbra. They would have to allow for sailing boats passing through, so the bridge should at least be 20 metres high. Other ideas to strengthen the local economy might also be welcome, like cooperation on cultural activities, development of the regional cuisine, crafts but also attracting digital nomads like the island of Madeira is doing now.

Concerned locals have started a website with information and a letter you can sign (in English, French, Portuguese and Spanish).