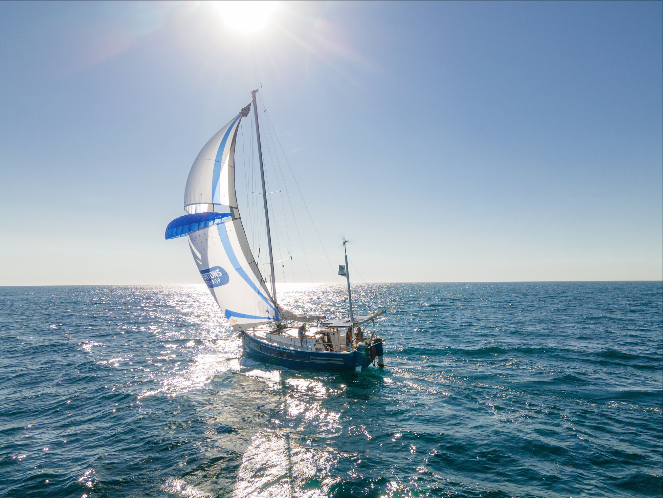 In the two last articles we discussed two kinds of hydro-generation.

The first was the alternator-to prop shaft hydro generation: simple and cheap to make.
Second was the towing generator . This I would not recommend, because an extra propeller gives extra drag. And astern, the water is highly turbulent, which is not efficient for hydro generation. While the ships propeller is under your ship in a laminar current, so it would be common sense to use this prop instead. And, towing generator costs some 4000-5000 Euros. If you would add this money to a renewal of your diesel motor for an electric motor, you have a good business case. And technically it is very easy to change an electric motor into an alternator.

Most ideal is have the propeller directly on the shaft of the alternator. And this alternator can be switched into an electric engine with one button, bringing you to the harbour and motoring through wind stills. This ideal system is working on the ‘Ya’ and we show you how it is done.

Hydrogeneration starts with the propeller

You can use your existing propeller, but if you think of buying a new one, then read this.
The best props for energy generation are large, slow running props. So, the 34 foot-long Ya has two 17 inch (43 cm) propellers. But for a sailing yacht, the drag, the resistance of such big props could be terrible. Close hauled, this drag will seriously increase the leeway. Therefore, the Ya does not have fixed props, but 2 Autoprops, that will go into feathering position when not in use.

Also, a fixed propeller is not logical on a yacht, because it is generally designed for one speed. Mostly around 4 to 5 knots, and with an RPM (Rotations Per Minute) of about 1500. But when you are sailing and the prop is in generation mode, the prop will rotate slower. If you could adjust the pitch (the angle of the blades), it would generate more.
On a sailing yacht, also the speed will vary. So that would require continuous adjustment. You should adjust the pitch with every gust of wind and every wave running up and down. If the blades were continuously adjusted to the optimum position, it would be the most efficient for generation. (And also, for propulsion.)

Well, the Autoprop is the solution to this all. It adjusts the pitch automatically. Whether in propulsion or in generation mode, if the speed varies, the rotations vary, and the blades will vary the pitch to the optimum position and vice versa. And, when in propulsion mode, the blades are adjusted by the rotations and the speed through the water. This can be seen in the film below:

The Autoprop adjusts the pitch on natural physics: the centrifugal force of the RPMs, and the impact of the water caused by the speed of the boat. So, no electronics, no chips or wiring, no hydraulic tubes, nothing. Just physics. The only maintenance is some lubrication every now and then. Isn’t it beautiful? It helps the Ya tremendously on its energy generation.

Want to know more? You find a very thorough explanation with an animation on the Bomarine site (Dutch spoken). The technology for the automatic adjustment is beautiful and makes our tech hearts run faster. But the economical hearts will start beating fast when you see the various tests. The Autoprop belongs to the most efficient props. Yachting did a prop test, or check the German Segeln. Underneath we show the outcomes of the French Voile Magazine.

An electric motor with a permanent magnet can easily be switched into an efficient alternator. Just with one button. Technically, this type is basically the same as the old-fashioned dynamo on a bicycle tire. The rotations of the current electric motor (and so the dynamo) do not have to be very high. So, you don’t need a reduction box before your propeller and that makes it efficient, less complex and lower in costs. And a slowly rotating propeller is more efficient, in generation and in propulsion. But on slow rotations, the propeller must be bigger and should be designed differently to be efficient.

If you intend to buy an alternator and electric engine, consider these things that were decisive for Ya’s choice for E-Tech.

Low maximum rotation. The maximum number of rotations per minute can be adjusted by the factory. On the Ya the max RPM is only 1040 RPM, with a pretty high torque (Nm). Slower rotations of the prop have three advantages: more efficiency, less noise, less wearing out. It saves you a reduction box with its resistance and fast moving parts, and less reliability.
The motors are brushless. Just like most marine electric motors, they no longer have brushes that “drag” along the rotor. These should be replaced frequently. This feature saves us lots of replacements, because the motors make many hours as generators.
Double thrust bearing. A thrust bearing is put in between engine and propeller and absorbs the pressure the propeller emits. This prevents the propeller from exerting its force on the motor itself. A permanent pressure on the engine would cause wearing, so this is prevented. Most electric motors only have a thrust bearing on the propulsion side (to forward). But on the Sustainable Yacht the generating side (astern) is mostly used. So, the propeller does not “push”, but mostly “pulls”. The E-Tech engine is therefore equipped with a thrust bearing on both sides.
Synchronous motor. A synchronous motor is ideally suited as a motor and as a dynamo. He can, as it were, “flow” into it.
Liquid cooling. A cool electric engine works more efficiently than a warm one.

The practice and the numbers

As soon as we sail more than 4,5 knots, we give a little reverse power to the engine, and the Autoprop is ‘soft started’ for generation. We push the Charge switch. With the throttle in neutral, we see the RPM display showing about 300. Then we push the throttle slightly forward and the dynamo starts doing its work. Inside the cabin you can hear a light, friendly zzzzoommmm…. The dynamo gives electricity to the batteries in 48 Volt DC. This sound is not irritating at all. It gives peace of mind. A crew member once said: “Dynamo, Sweet Dynamo” 😉

On 4,5 knots the energy production is not more than some Watts. But on 5 knots the dynamo delivers 50 Watts. On 5,5 knots it nears 100 Watt and when doing 6 knots it is over 150 Watt. Great fun it is when you reach the hull speed of the Ya of 7,3 knots and make over 250 Watts with each alternator.

In general, we are leisure sailors. At sea, especially the ocean, you sail your ship conservatively and for the 34 ft Ya a general speed of 5 to 5,5 knots is good. Some people find this a high average, but realize that we also have a Parasailor sail. It gives the power of a spinnaker, but is easy to handle with two persons, even when the wind gets stronger and you want to lower it.

Perhaps you find 100 Watts not much. Well, it is. This runs 24 hours a day, so count on 2,5 kWh per day. This is enough to cook an extensive meal with our induction cooker, oven and microwave. So, we are happy on the Ya. But it must be said that our speed is critical for obtaining this result. I would not recommend to seriously spend money on a prop and dynamo for a leisure yacht shorter than 30 feet, simply because you always have to sail too close to the hull speed for a good energy gain.

In 2012 we collected some statements from electric motor suppliers about the generation possibilities. The impression was created that with a propulsion prop, about 5% of the maximum propulsion power could be generated. That would be 650 watts with our 13 kWatt (2 times 6.5 kW) max power and therefore much more than our practice on the Ya. But still they can be right: you only need a larger yacht! For example, a 60 ft yacht would easily do 8 knots, and then the 650 Watts generation is a piece of cake.

But what really helps is that the hydro generation is the third leg of the tripod of our energy household. Now, there is always energy coming in from somewhere: sun, wind or our sailing speed. And, we have a light, reliable engine in our ship.