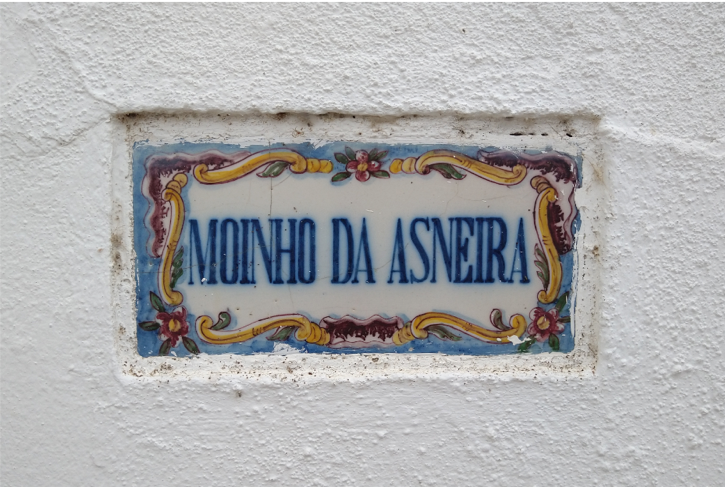 A Portugese friend advised us to sail the river Mira, because he thought it could be beautiful. The mouth is some 50 miles south of Lisbon. We found a river with a long history and a great, but “foolish” innovation.

Entering the river Mira, a navigational hurdle to start with

The mouth is poorly charted. There are no buoys to guide you in, because strong tidal currents and the breaking ocean waves constantly change the shape of the sandbanks. We had to cross the sandbanks and then go around rocks, partly washing. Then there was a narrow entrance.

We were before the mouth in the late afternoon. We could see the pretty town of Vila Nova de Milfontes on the hill. At that time the tide was pretty low and we could see the rocks clearly, as well as parts of the bank. The ocean brought considerable waves building up high and steep and the last ebb stream curled them before they fell broke on the bank. Entering now was dangerous, if not suicidal. So, we had to wait and try it the next morning.
Lucky for us, the weather was calm so we could anchor at sea. However, the Ya was rolling in the waves, so we didn’t get much sleep. And we asked ourselves if the state of the sea in the mouth would be that much better with the flood. Would it be worthwile this sleepless night, or do we have to skip this beauty?

Next morning, when the flood was nearly on its end, and the water was high, we went to the mouth again. The state was completely different. No breakers, only at the rocks. We went over the banks flawlessly, with a wide curve around the rocks. Happy that we have engines and what great sailors were these Portugese in older days, doing everything under sail.
Then suddenly we were in the peaceful river Mira. We anchored in front of Vila Nova de Milfontes.

Some history and the first renewable energy

In Vila Nova de Milfontes we were intrigued by a small image on a tourist board. Along the river Mira there used to be tidal mills.

We started a research and were invited to join an excursion of the regional association for cultural heritage to find out more. Mr. Antonio Quaresma is a historian and author of a book on River Mira and he started telling. Already in Roman times, 2000 years ago, there were small factories along the river for conserved fish. It was a very profitable market, until the fishes got smaller and were harder to catch. Also in that time, the balance of the ecosystem counted, although local.

In the Middle Ages the landlords ruled, because they could bring up enough military force to keep the Arabs away. This led to stability, which is the condition to innovate in big projects. We all know Vasco da Gama, and Columbus, who were the first sailors to undertake world voyages. Earlier we see that in the 1400s the windmill, the moinho do vento, enters on a larger scale. They were small and simple and they could catch the wind on every mountain top. At noon the wind from the sea picks up, and then the mill could run until the evening. They were mainly used to grind the grain and corn to flour. They were worth the investment, they could do the work of a few dozen workers.

Disadvantage of the windmill was that the wind did not always blow. Especially in the winter, one could need some reliability. Perhaps the water could help?

In about 1550 a project has started along the Mira. A big project. Idea was to create a mill that would work on the water tide. A tidal mill, a moinho de maré, also works in the winter and that would create a reliable, continued production of flour throughout the year. Some 2 miles upriver from Milfontes, there was a small side arm. They cut that off by building a dam, for a basin.

They made three holes in the dam.
One hole in the dam is made to let the water in with the flood. With high water, they closed the hole.
The two other holes in the dam were to let the water out when it was low tide. And here is the trick: they let the water come out through a nozzle. This would blow the water with great impact on a wheel lying on the bottom. This wheel had a shaft going up, to power a mill stone. They made two mills, to be extra reliable and to improve, innovate further. They built a little house over it, to keep the installation, the grain and the flour production dry en free of vermin.

Would it work? The rumor goes that nobody in the neighborhood believed in it, so they called this project ‘Asneira’. The ‘Moinho da Asneira’, The mill of a fool. The name never changed. Now there is a small resort around it, called Moinho da Asneira.

It turned out that it worked. From then this region has for a long time known the reliability on producing flour. A bit like the Ya: always make sure you have more than one source of energy and you can live fossil free  reliably, even if you sail fossilfree around the world.

Does one learn from the past? You might think so. Portugal enrolls the E4 programme: Energy Efficiency and Endogenous Energy . So the efficiency for the reduction of what you use. This is just what the Ya is good at: reducing the use of energy.

Does it work? In about 15 years time, Portugal gets 30% of her energy from its own renewable energy, and it is still rising. The fossil fuel consumption lowers about every year. In May 2016, all of Portugal’s electricity was produced renewable for a period of over four days, a landmark achievement for a modern European country. Not fools’ work at all.

Check here where the Ya is now.